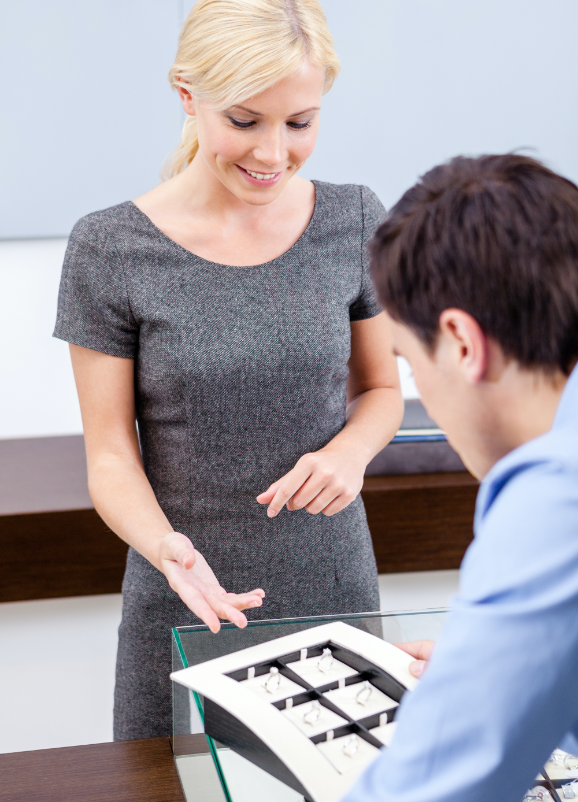 Buying an engagement ring is a huge undertaking for anyone considering making a commitment to their partner. What better way to symbolize love than with a diamond ring? As the saying goes, “Diamonds are forever”. There is no doubt that a large number of people have preconceived notions about diamond rings, of which the majority are true. On the other hand, lab grown diamonds are the ultimate solution to those lingering questions. They are better than their mined counterparts in every aspect while being significantly less expensive.

The truth is that many people are not familiar with lab-grown diamonds as they do not fully understand what they actually are: lab-grown diamonds are 100% authentic. It’s impossible even for professionals to tell the difference between man made diamonds and mined diamonds because they have the same physical, chemical, and optical properties. It is important to note that they are not diamond simulants like cubic zirconia, despite what some unscrupulous sites might lead you to believe. Despite resembling diamonds, cubic zirconia and diamond simulants are fundamentally different. They cannot last as long as real diamonds; most importantly, they are missing the signature spark that real diamonds are so well known for. The physical properties of synthetics, better known as diamond simulants,  are so entirely different from real diamonds (mined and lab grown) that any professional test can easily reveal the difference by looking at their chemical makeup

Diamonds created in a laboratory undergo strict controls, resulting in brighter, whiter diamonds with fewer flaws than natural diamonds. On the other hand, the environment in which mined diamonds are formed - deep inside the earth’s crust - is composed of numerous other elements that naturally leak into the growing crystal, resulting in impurities.

Furthermore, lab grown coloured diamonds are more uniform and vibrant than their mined counterparts. In order to achieve this remarkable feat, trace chemicals are dosed very precisely into the diamond crystal as it forms. As an example, yellow diamonds derive their colour from nitrogen, while blue diamonds derive their from boron.

There are numerous ethical issues associated with purchasing mined diamonds, including environmental damage, child labour, and diamonds being traded for arms (conflict diamonds). When buying a diamond, it’s important to know where it comes from and its effects on the people and the planet on its journey to reach you. Gifting a symbol of love and commitment to your beloved is a once-in-a-lifetime experience, but it cannot be done in a way that reflects tragedy and suffering on others. On the other hand, a lab-grown diamond does not have any of these issues since it is both mining and conflict-free.

Moreover, mining causes massive environmental damage and consumes large amounts of fossil fuels. The soil and groundwater often become permanently contaminated when an area has been mined, devasting humans and animals dependent on them for survival.

In contrast, man made diamonds are created in sterile high-tech labs, which by their very nature do not use child or slave labour, unlike diamonds that are mined in conflict regions in Africa in brutal conditions, earning them the shameful epithet “Blood Diamonds”.

Now let’s talk about the prices. It makes sense that such high-quality diamonds would come with prices that match. Counterintuitively, lab grown diamond jewellery, despite being better, can result in a net savings of up to 70% over an identical mined diamond. As a result, with the same budget, one can easily buy a larger diamond of better quality or an engagement ring with a more elaborate design and intricate detail. The choice is absolutely up to you

So now that you have all this information, what are you waiting for?! We invite you to browse our extensive collection of beautiful and expertly crafted lab-grown diamond rings and let our experts help you choose the perfect one.